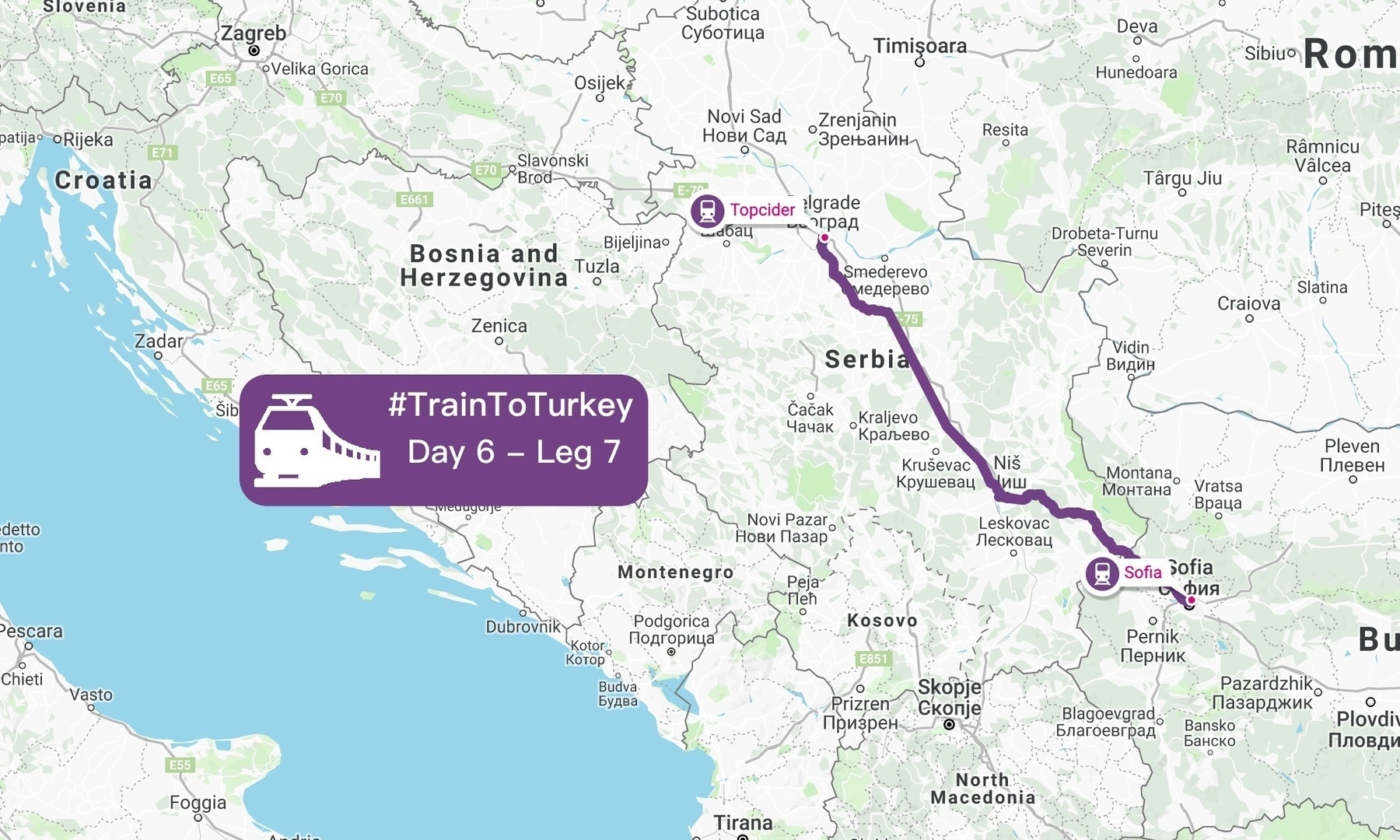 It’s fair to say that this is the part of the journey we were most worried about. The daily train between Serbia and Bulgaria is the one which we have invested the most research and nervous phone-checking during our trip. We even had the staff in the hotel double-check that the train is actually a real train and contacted people online who had been on it before. 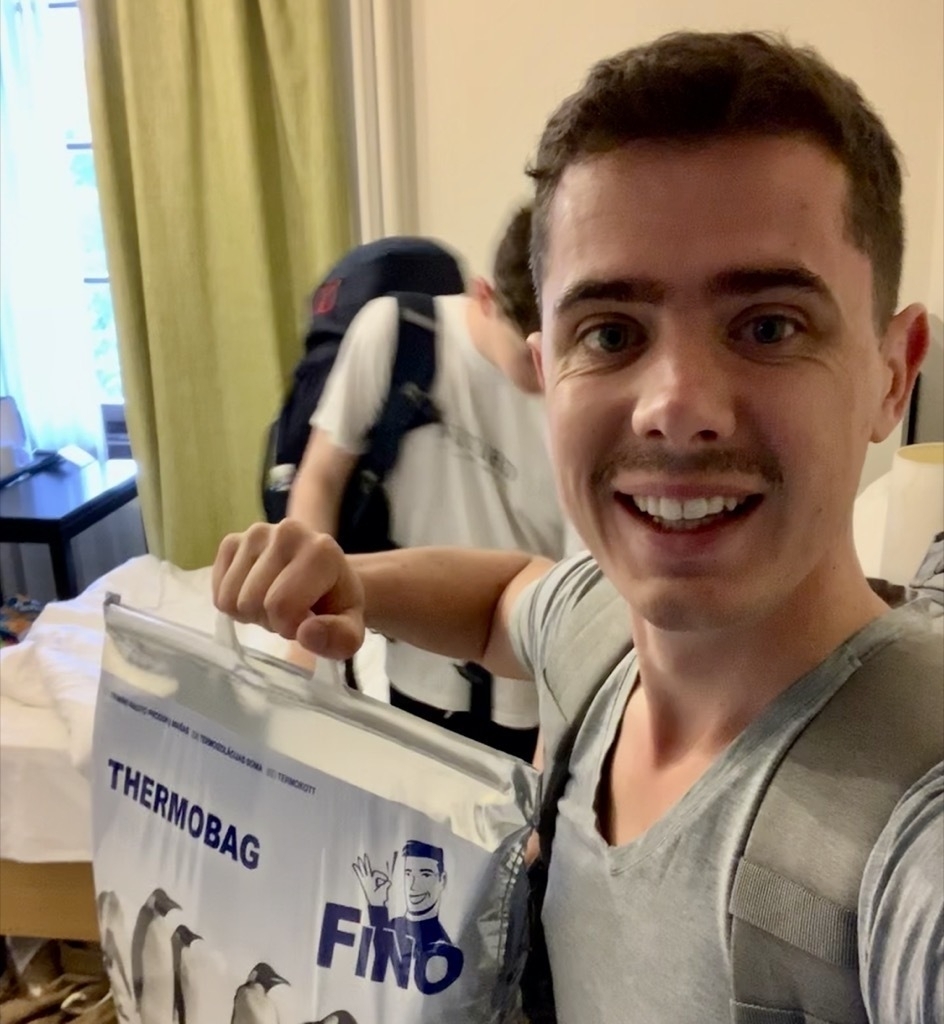 We woke early that morning and taking no risks had the hotel arrange a taxi to drop us off, there is no Uber here in Serbia so it was conventional transport methods only. The driver seemed to be completely clear about our destination, but after 10 minutes we arrived at the wrong station, luckily it was on the way to where we needed to go, which was just another 10 minutes or so away.

The train to Sofia departs from a different station to the one which we arrived, I’m guessing that this is because following the closure of the older main station trains were moved elsewhere while construction on the newer station (where we arrived from Zagreb) is completed. The (presumably temporary) Topčider Station was a much smaller station seemingly in the middle of nowhere, in a big park. In our taxi we passed several backpackers who were walking, I’m glad we weren’t because the weather had now turned and it was tipping it down with rain. Now at the right station, we paid the taxi driver in what remained of our Serbian Dinars and made our way to the station building. We were at least 30 minutes early, keen to make sure we had time to take some pictures too. Topčider is a confusing station, it doesn’t have any departure boards, it doesn’t really even have any platforms and it didn’t have many other passengers either. A few locomotives were standing in what is more of a railway yard than a station but none of them looked much like what I had seen online. A very Serbian man seemed to ask where we were going and understanding Sofia signalled us to wait here. So wait we did, in the rain. 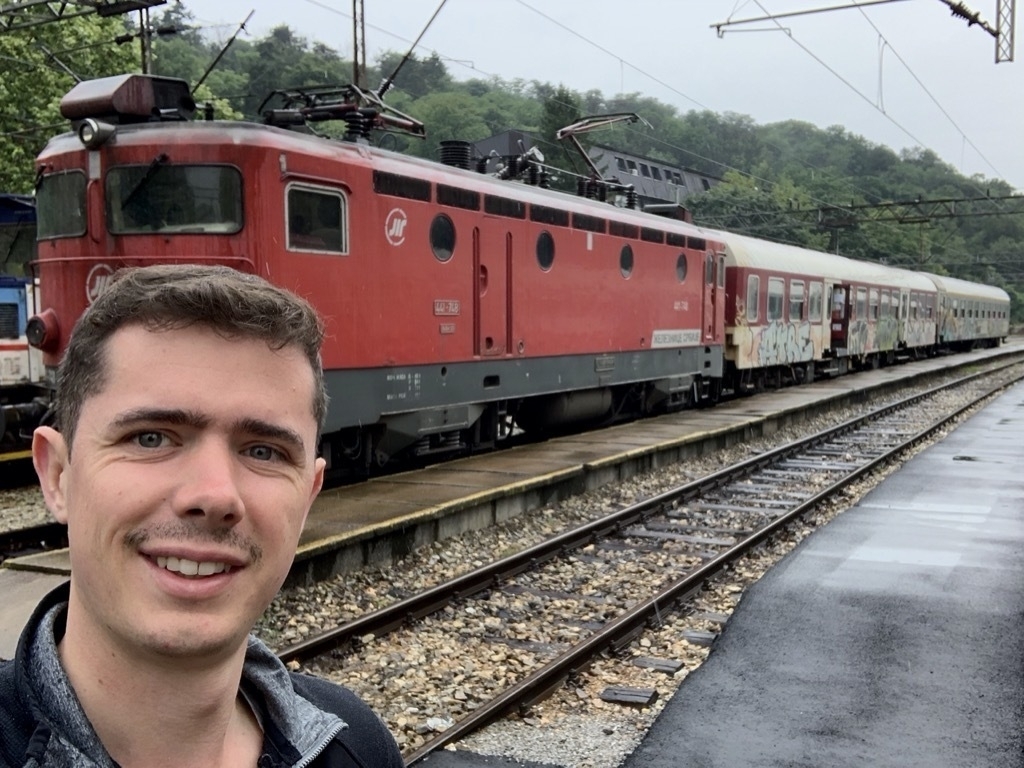 Several other trains passed through, one magnificent blue train with steamed up windows arrived and dropped off some passengers before making its way on. The man at the station reiterated his sign language for us to remain standing where we were. Another train shunted some empty wagons around, they appeared to be vehicle carriers, a little like those used in the channel-tunnel, just much, much less fancy. Finally, our train arrived and the man at the station pointed for us to go and get on it. I’m still unsure if the man worked for the railway or whether he was just a man at the station. To our relief, the train had some paper stickers which confirmed it was ‘The Balkan’ with a destination of Sofia, Bulgaria. 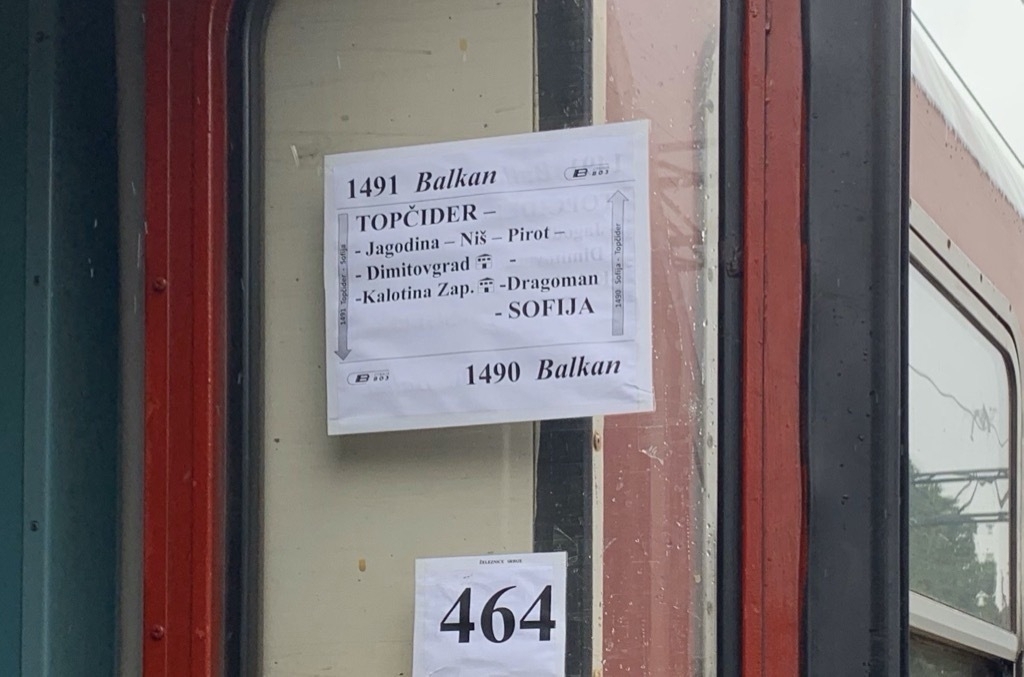 We walked up and down the train, there weren’t many other passengers at this stage but they all soon started arriving. There were two carriages behind the locomotive, one was an open layout and the other was made up of compartments, much like the train from Zagreb. One of the compartments we walked past had a policeman laying down and fast asleep. We decided that we’d play it safe and sit in the open carriage. There were a few local passengers but it was mostly backpackers, there were some guys from Germany and two people from Norway (I think). 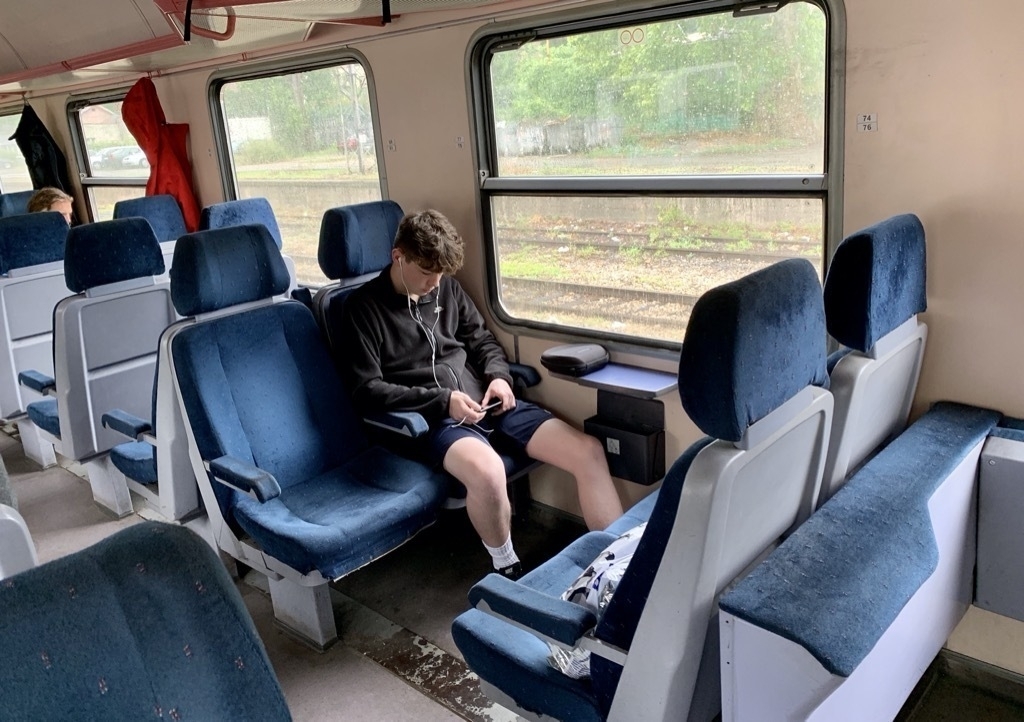 Without much fanfare at all and right on time, we got moving. Owen settled into his seat and we prepared for the long day of travel which lay before us. We slowly passed through the park and then through the suburbs of Belgrade, we were surprised at how hilly the outskirts of the city were and how quickly that it changed from city to countryside. We stopped at a local station just outside of town which again looked more like a railway yard than a station, there were old wagons, locos, cranes and all sorts. A few locals got on and a few got off, I don’t think this stop was on the schedule but I wasn’t able to note the name of the station. 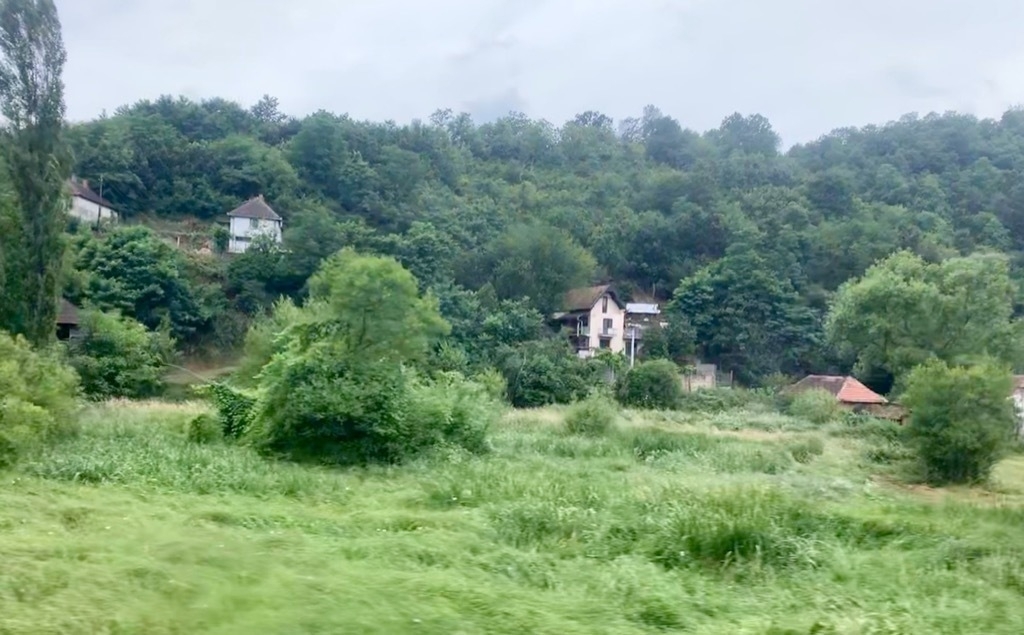 Continuing on it didn’t take long before we were in the full-on countryside, the train line was effectively a straight line down to Niš in the south-east, right through the centre of the country. We passed through small villages and occasionally stopped at a station where a smartly dressed station manager would greet the train, the proceed to bang something under the carriage with what looked like a hammer on a long handle. Very few passengers on the train changed, occasionally people would get on at one remote stop and then get off at the next. 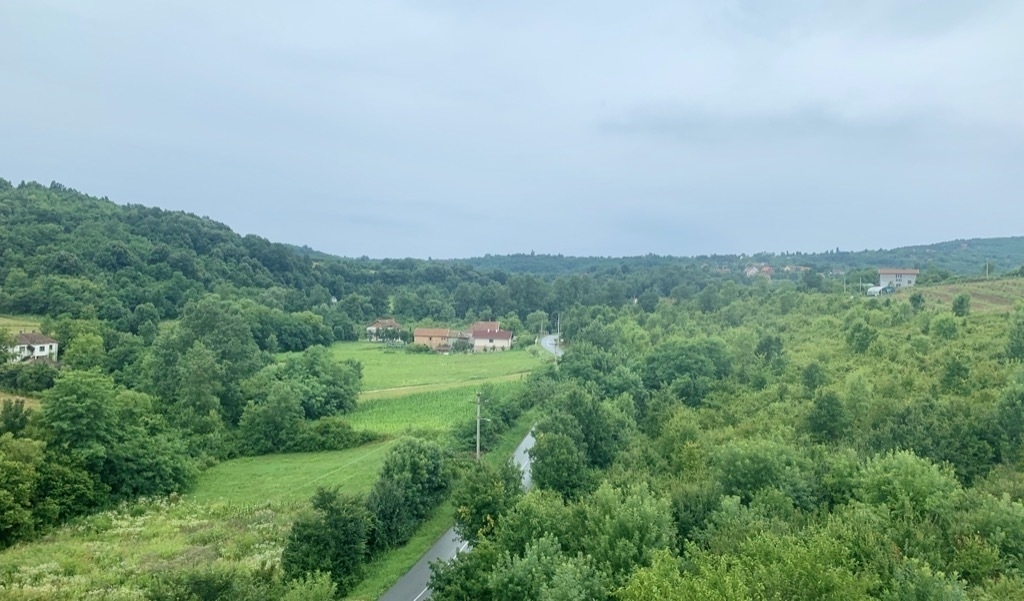 There was a conductor on the train, a very stern looking lady who shortly after leaving checked everyone’s tickets. Almost everyone has an Interrail Pass and she diligently verified that we had updated everything correctly and stamped it with her special Serbian railway stamp. After the one ticket check we never saw the conductor again, I assume she stayed on the train, but I can’t be certain. The rules on this train were a little different to those which we’d travelled on up to this point, this was the first train where smoking was acceptable. Only in the vestibule mind, but still, that’s a little unusual. Whether it’s permitted or not we weren’t sure, but it wasn’t particularly bothersome. 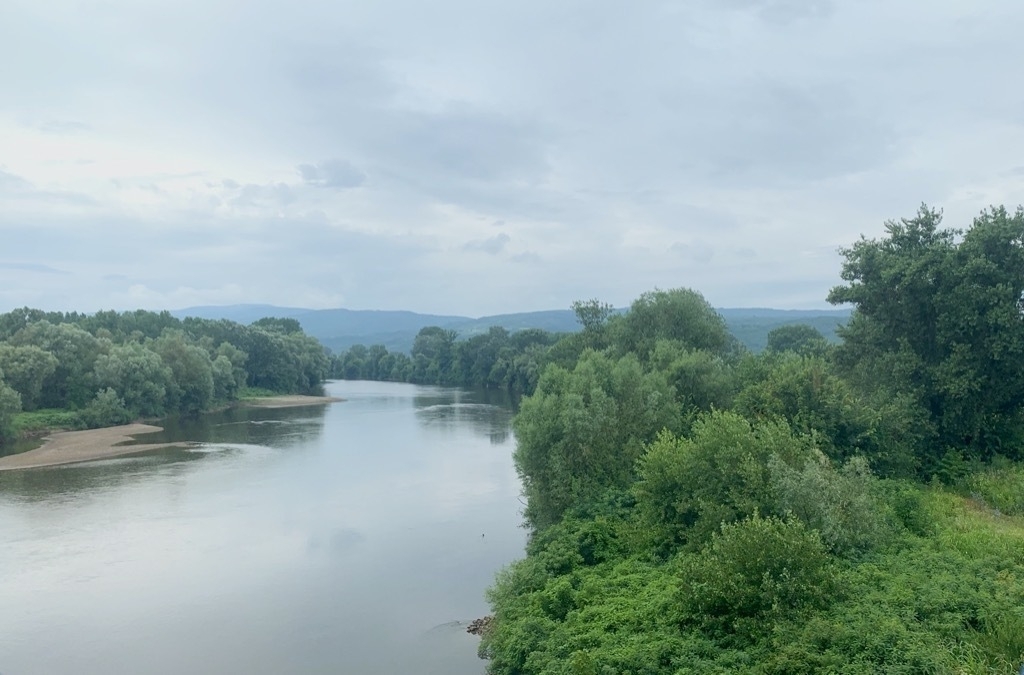 The landscape changed as we travelled across Serbia, there was sometimes a town with a factory of some kind, many fields and small rural villages which don’t look like they’ve changed in 100 years. We held out until 12 for lunch and then tucked into our nice cool sandwich from the cold bag. The beers were too nice and cold, we were certainly the only ones with a cold beer and I was very smug about it too. The only problem with drinking was that the toilet on this train was absolutely the worst toilet I’ve ever experienced. It wasn’t far away from “The Worst Toilet in Scotland” from the movie Trainspotting. How it is possible for a toilet which is just a hole in the floor to smell as bad as it does is beyond me. 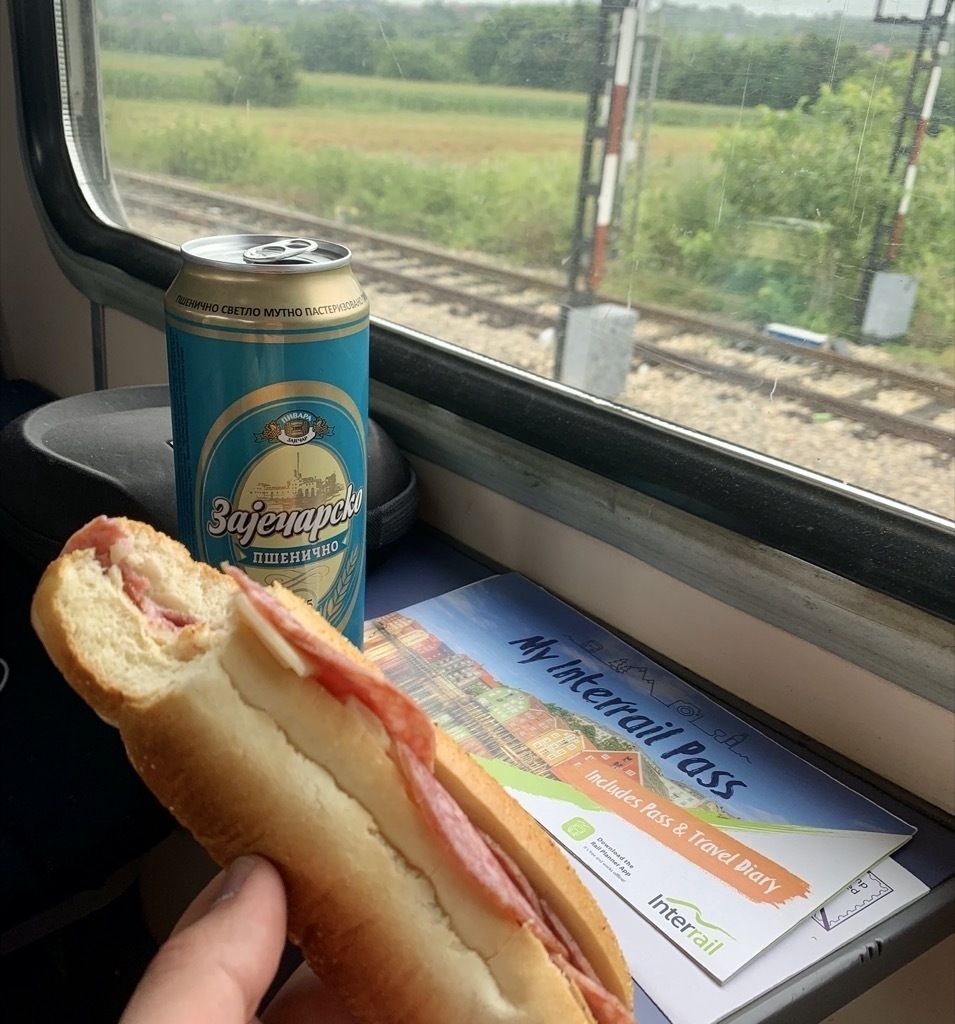 The day went quite quickly and before we knew it we were approaching the outskirts of Niš. This city was not like Belgrade, it was much smaller and clearly not as visited. To our surprise, the train hung around in Niš for about 20 minutes or so. The group of Germans which has been on the train since Belgrade had somehow managed to arrange a rendezvous with some locals who had bought them beers (the 8% variety). I don’t quite know how they achieved this, but it was pretty impressive and I was a little jealous. We were joined on the train by two french girls who appeared as if they had been travelling for several months (they needed a shower) who promptly proceeded to fall asleep. The train got moving again and to our surprise, we were reversing out of Niš, this was good news as our carriage was now at the rear of the train. As we kept moving we passed through the stunning Sićevo Gorge where the train followed a narrow track along the Nišava river, it was absolutely brilliant! I stood by the filthy rear window to try and get a few pictures, almost all of them are completely unusable but the view was fantastic nonetheless. 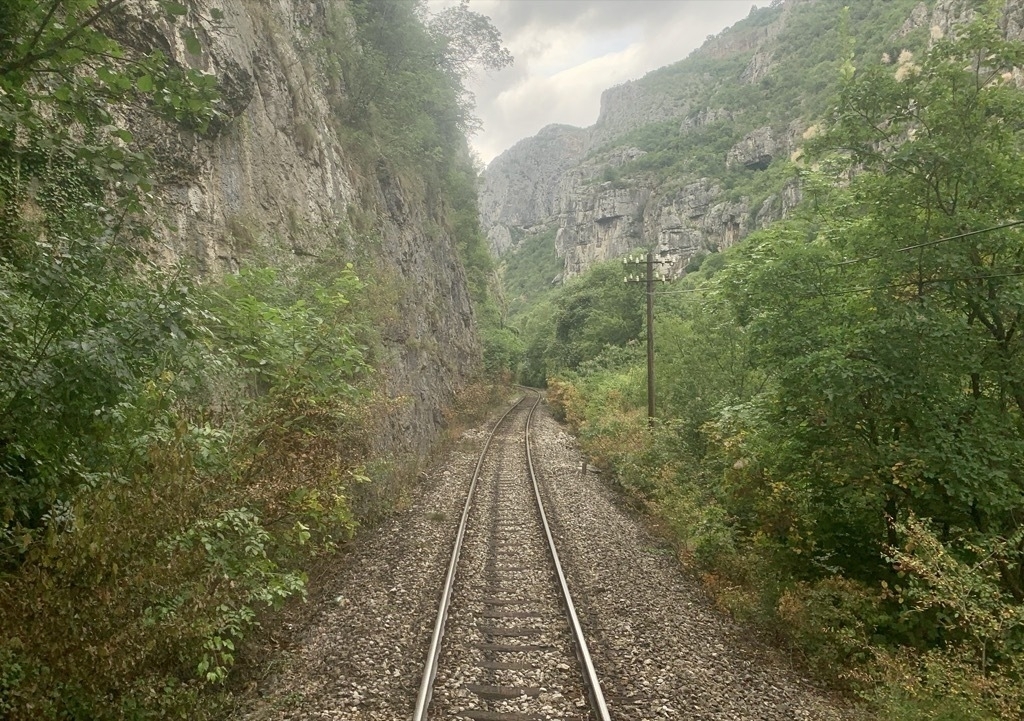 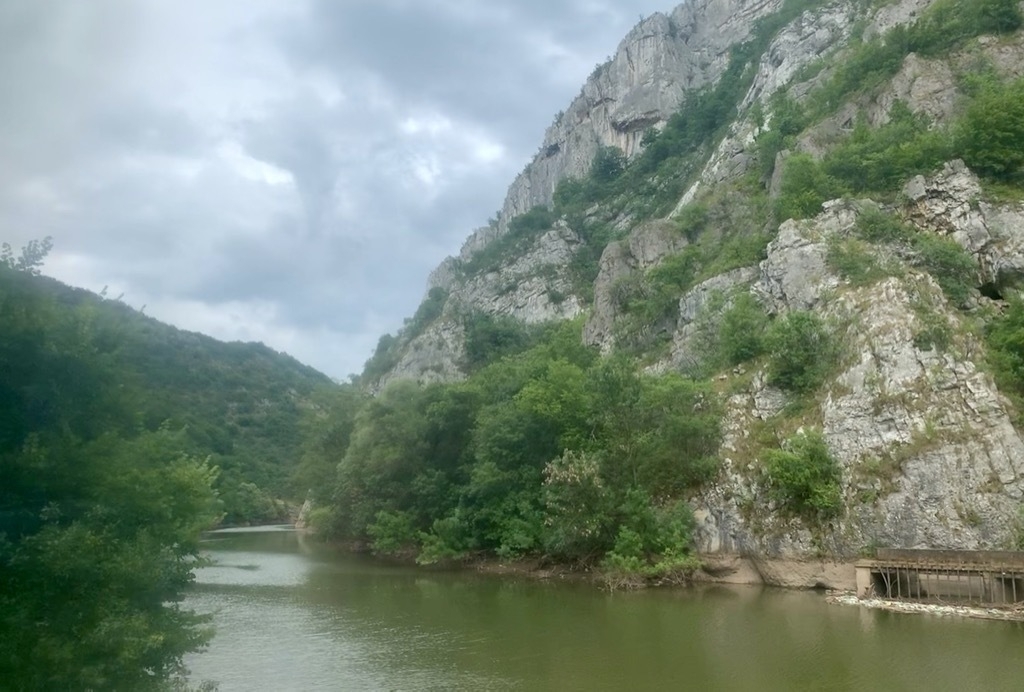 As we were passing through the conductor reappeared and woke the two French girls who it turns out had no ticket and no money. I can’t quite remember what happened but I think they sort of handed over whatever they had left - a very strange situation which left the conductor quite cross.

Passing through the gorge we were on the final leg through to Sofia. About halfway through, we reached Dimitrovgrad which is the border town between Serbia and Bulgaria. We stopped at the station and were boarded by Serbian officials who collected up everyone’s passports while briefly checking the photos. Everyone on the train waited in a rather confused state hoping that we would see our passports once again. After about 15 minutes or so the men returned and in reverse order to their collection redistributed the freshly-stamped passports to passengers. 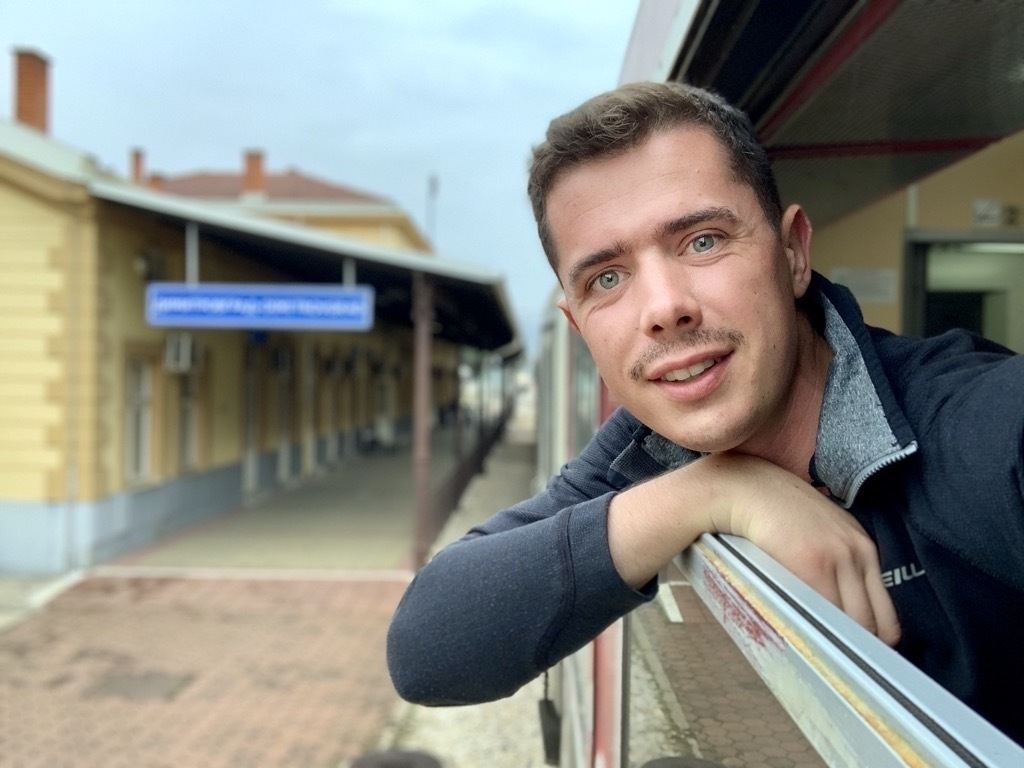 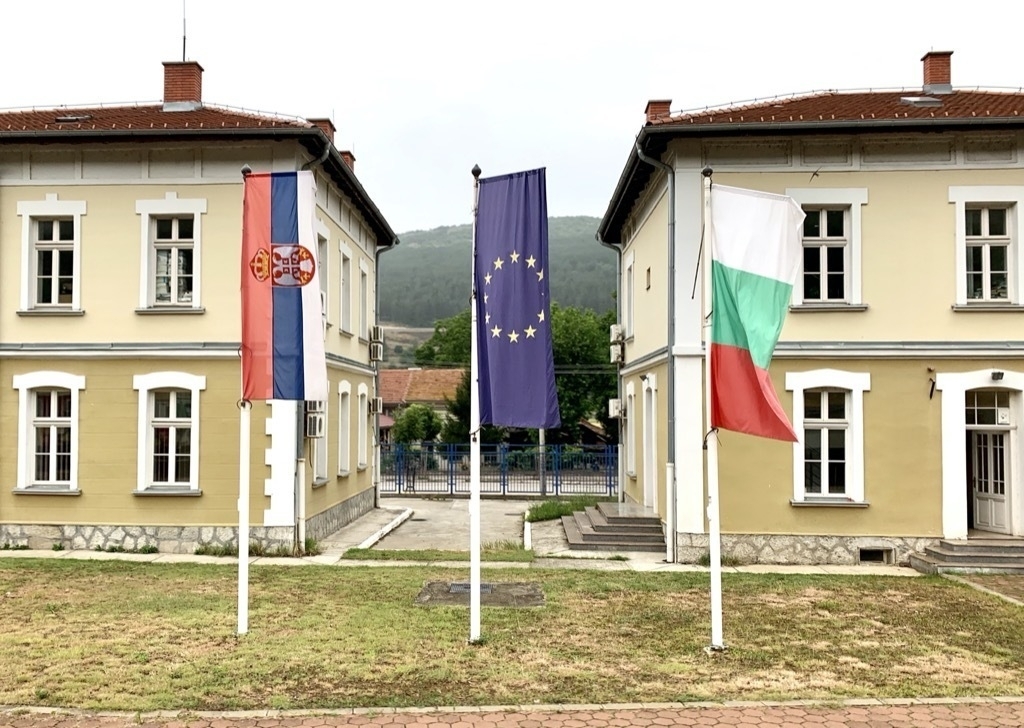 The train continued into Bulgaria where we promptly stopped once again for another passport check. Rinse and repeat of the last encounter except for this time we weren’t blessed with any ink as we had returned to an EU member state (although not in the Schengen area). At this point I think the driver swapped with the train on the other line, presumably he was from the Bulgarian State Railways rather than the Serbian counterpart. The journey through Bulgaria to Sofia was quiet and uneventful, the train continued on and we arrived right on time, 20:30 EEST. Our 11 hour and 20 minute trip had taken us 203 miles as the crow flies from Belgrade, our longest day time train yet and we were quite tired despite having done nothing but sit down for an entire day. 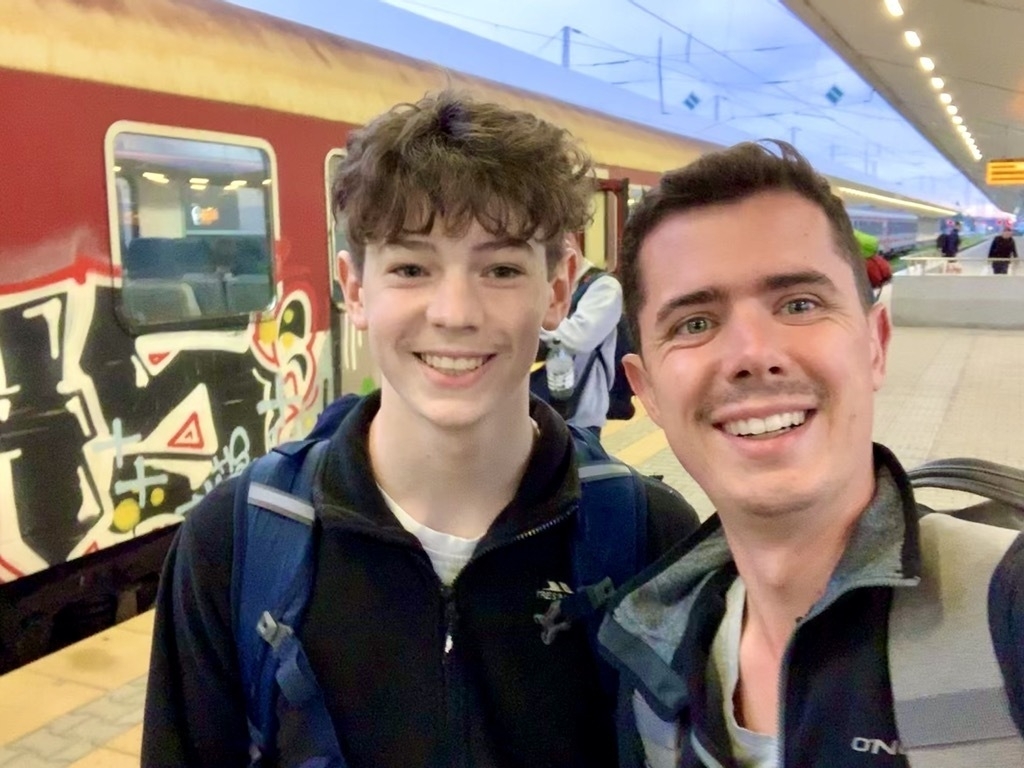