George James Haymon is my great-great-grandfather - he’s my mum’s, mum’s, father’s father. Until recently I didn’t know too much about him, but my late grandmother shared with me some of his documents and what she had been told of his life. We are very lucky to have these documents, they’ve survived many years and while not in perfect condition it’s incredible to hold an object that he once held and to read the writing that he once wrote. This series of posts is a dedication to him and a collection of the facts (and questions!) that I have been able to gather bout his life and military career.

George was born in Riverhead, Sevenoaks to Amos and Eliza Haymon (née Coorke) in early 1889. At the time of his birth his father was 42 and his mother was 36. He was the born into a relatively poor, working class, growing family. He had four older siblings, Alice who was a servant in a nearby house and three brothers, William, Harry and Stephen. George was baptised in Otford, near Sevenoaks on the 3rd of July 1889, not far from where his mother was born.

His mother and father, Amos and Eliza went on to have several more children, giving George another sister, Sarah and two more brothers, Edward and Albert. As of 1901 the family had moved to 72 Colebrook Road, a small home in the parish of Southborough, north of Tonbridge Wells in what is now known as High Brooms. The village was relatively new, built to house those those working at the brickworks, which was established in 1885 and a major employer. George and his siblings went to school nearby in what is now known as St Matthew’s Primary School.

At age 12, George would have been old enough to remember the death of the reigning monarch, Queen Victoria and the ascension and coronation of King Edward VII. A significant event in Britain, marking the end of the Victoria era and the dawn of the new century under a new monarch.

After finishing school George became a labourer, possibly at the brickworks or alongside his father. After turning 18, George opted to enlist in the Army, likely supported by his elder brother, Harry who was in the Royal West Kent Regiment and posted at Maidstone. The army was at the time in a state of reform, as Britain adapted following the Second Boer War. George enlisted to the Royal Sussex Regiment as a Private (9857) in Chichester just before Christmas 1907. As a new recruit he went through his 49 days of enlistment drill training but saw no active service.

In December of 1907 George changed regiment, leaving the Royal Sussex Regiment with a note of “Good Character” and attested to the Coldstream Guards for 3 years full service and 9 years in reserve, just before his 19th birthday. The Coldstream Guards is a prestigious regiment of the British Army, part of the Household Troops and is stationed in London. Coming from a relatively poor family, serving in this way for his new king must have been an incredible honour. George was assigned service number 7574 and was given his ‘soldiers small book’. He would have been transferred to Wellington Barracks for his service.

Shortly after Christmas that year, George’s Father, Amos died aged 61. It’s likely that George wouldn’t have been at home when he died but his death is reflected in his small book, where his father’s name is crossed out. Later that year George received a Certification of Third Class Eduction as part of his Military Eduction while part of the Guards. Not a lot is know about his time in the service, I’ve unfortunately been unable to find his service documents, although they should exist. It’s most likely that at some point he would have participated in ceremonial duties and even seen the new King. 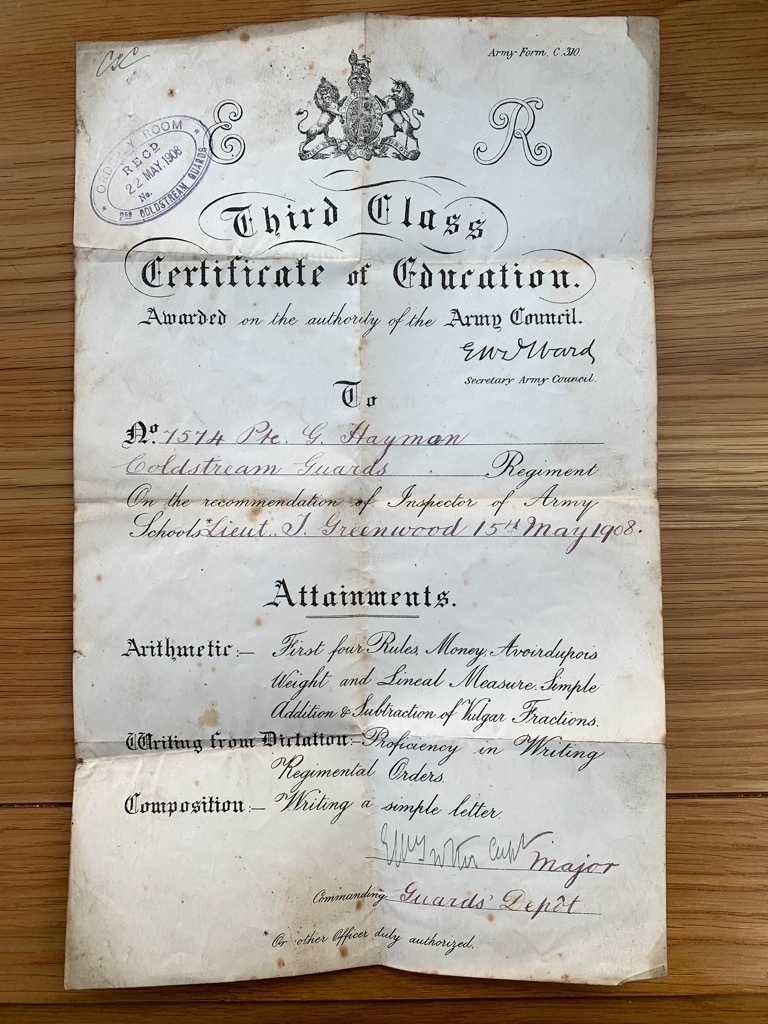 After he completed his three years service he returned home and became a painter. His family had moved to a new address, 51 in the same street, Colebrook Road. On the 4th February 1911 George married Mary Louise Baker at Tonbridge Registry Office. Mary was living in Walworth, London so it’s very likely that they met while George was stationed in London. They were joined at their wedding by George’s eldest brother, William and mother, Eliza.

Later that year the newly wed couple would have read about the coronation of King George V and Queen Mary in June, the last coronation to be attended by the ‘old’ European powers. Mary gave birth to their first son, Amos George on the 29th July 1911, very fitting that he should bear the name of his late grandfather. They remained at home in High Brooms, with George’s mother who was working as a Hawker (Trader).

Between 1911 and 1914 the couple would move to 46 Southview Road in High Brooms, just around the corner from George’s mother and brothers. They would have two more boys, Albert William on the 23rd March 1913 and John Edward on the 28th May 1914. Shortly after the birth of George’s third son, on the 4th August, 1914 everything changes. While George is still serving as a reserve solider, Britain declares war on Germany.