With the first race of the shortened 2021 Keelboat Spring Series abandoned due to lack of wind, this was the first real race. A 10am start with five boats, fewer than usual with many still on the hard due to COVID mixing things up. There were five boats racing, two in class 3 ‘white sails’ and three in IRC, class 1. With so few boats a start from the club line was announced, with both classes to start simultaneously. Class 1 were racing course 20, in Class 3 we were running course 15. On Upnor Reach there was reasonable wind, but three faster boats jostling for a good start meant that we struggled to get away well. We were squeezed on the line by Reefer forcing us into the main part of the river. 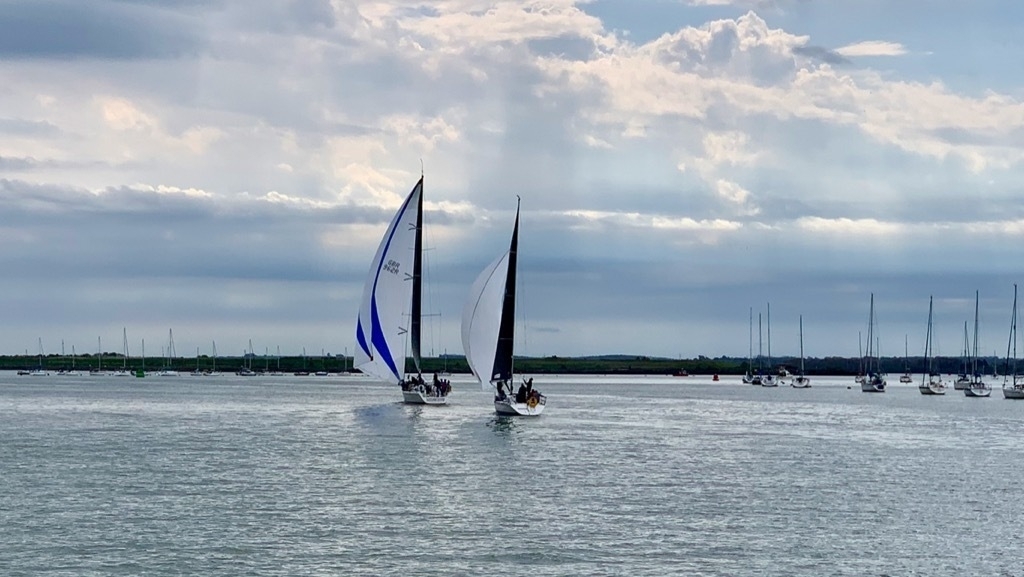 Our only class competitor, Muskrat Ramble got away calmly, hugging the club shore away from the rising tide. With that advantage, they took and held the lead for the rest of the race. As all boats headed towards Short Reach the IRC fleet stayed in the main channel, initialling struggling for speed until bearing away past Hoo Ness. We made some ground once we passed mark 31 but were forced into a tack at Hoo Ness to avoid getting stuck. The SSW wind picked up in Gillingham reach and put us in a healthy broad reach past mark 25 (Folly), leaving it to port. We watched the rest of the fleet take off, with us tailing Muskrat where we ran through Pinup pulling in to a beam reach through Long Reach to mark 15 and 16, leaving them both to starboard.

Heading back up river we left mark 18 to starboard, passing MYC 4 to port before heading home. An easy close-hauled sail back toward to club with some good speed in places. There were plenty of small craft out by now, with the club’s new Musto Skiff fleet and plenty of cruisers heading out to Stangate Creek and Queenborough. We were chased by Mercury but who despite being on a much longer course caught us as we passed Upnor Line with their Asymmetrical showing the difference a big sail can make! We weren’t bothered, we had beers in-hand and smiles on our faces.

The cadet Topper and Laser fleets surrounded us as we finished with an easy cruise past the line. The wind picked up a lot as we waited for the lock, which had been closed since we left for a 10k running event. The tide was full by now so we were in the marina before we knew it.

With us back earlier than expected I went up the mast to fix a guide line between the fixed rigging and the radome, which had come off in the race before last. In lighter winds the guide line makes a big difference in helping the genoa shift from either tack, it caught several times today. I took the opportunity to clean the bottom of the spreaders which were green with algae! We had a few beers and packed up. Home in time for the grand prix!

Despite the excitement, we managed to get a short video crossing the line. Will try to get some more in future, it’s trickier than it seems!