A quiet, sporty and wet race this week. It was going well right from the start, we had plenty of beer as we boarded Astral with both Andy and I bringing beer, in addition to a big crate of Stella already on board. We slipped the berth for the 9am lock and were joined with Elite Sailing’s Spirit and Lightning. Lock out took a little while and with low tide approaching we only had half a meter below the keel. The three boats in Class 1 were already in the river, where we had around 11 knots of SW wind, much more than last week. We were racing course 26, with the other boats racing course 38 (rounding the wreck and back). Small drama as we got going, while hoisting the main a snagged reefing line tore the sail cover - not ideal. The start was otherwise sensible and calm, despite being surrounded by cadets in Toppers and Optomists! 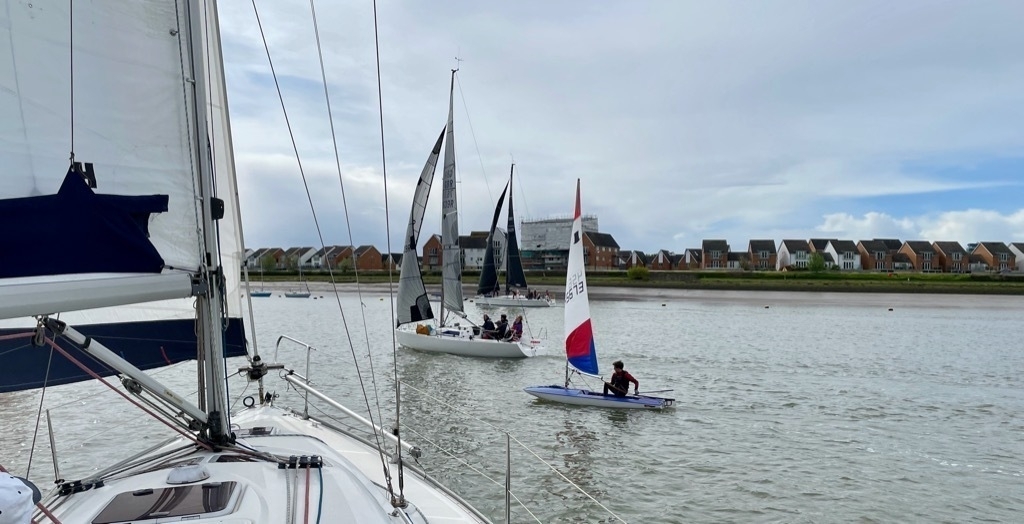 We made good progress off the line and along short reach, for a while we even overtook ‘The Works’, a Projection 762 in Class 1. They closely hugged our starboard aft until we passed round Hoo Island into Gillingham Reach where they then got away from us very quickly! We watched the other boats disappear into the distance from here, as they put up their big sails. We were having a gentle sail, passing Folly point then running down to our first mark, 23. Then on to mark 15, passing Kingsnorth Power Station and it’s jetties. Easing round into another run we put the genoa out on the pole, doing about 7 knots we passed Kethole Reach and the West Bulwark mark. 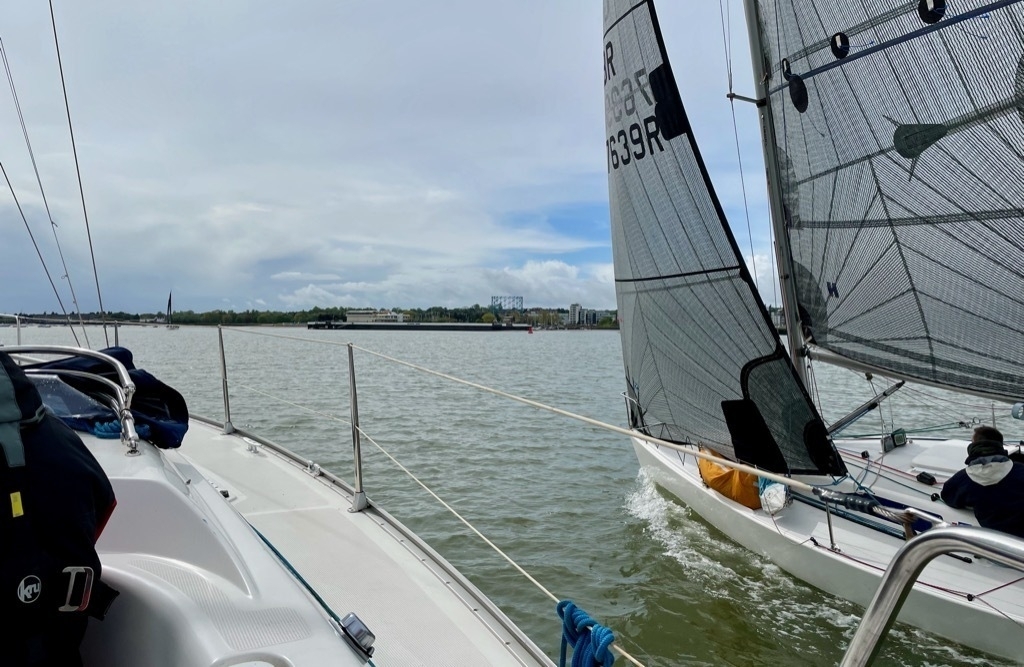 I didn’t know until recently that the West and East Bulwark marks are named for the wreck that lies here. The explosion of HMS Bulwark was a very significant naval incident, 741 men lost their lives in 1914, the single biggest loss of life in naval history at the time. This was later exceeded by the much more known, explosion of HMS Vanguard while at anchor in Scapa Flow in 1917. 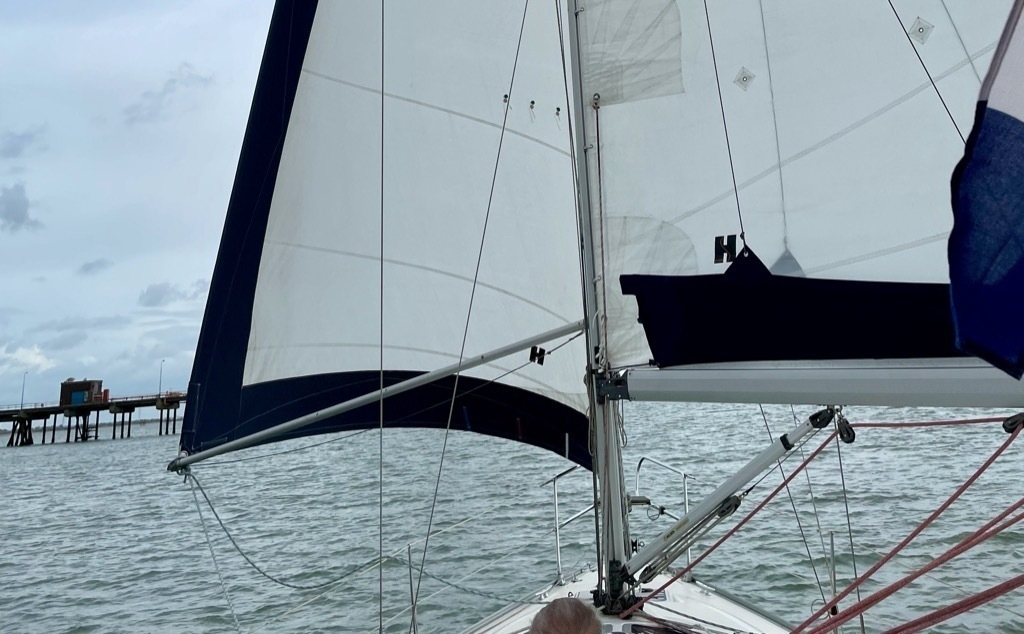 Rounding west Bulwark we briefly tacked back upriver to round mark 16. It was clear to us here that the weather was coming in! We got geared up as it came over the horizon. The wind picked up significantly, we were showing 24 knots and as the rain hit everything got a bit hairy. Getting round 16 was a relief and as the same weather pushed us back downriver towards West Bulwark for a second time we furled some genoa to keep things under control! Heading out to the furthest mark, Stangate Spit we put in a mainsail reef anticipating the need to tack back in reasonable wind. We saw the Elite Sailing boats around here, practising man overboard drills. Gybing round Stangate Spit we still had a good amount of wind and were making an easy 7 knots over ground. Heading home we were tacking all the way, with no course marks left to significantly alter our journey. As we did the weather came back once more, although we’d barely dried of from last time! 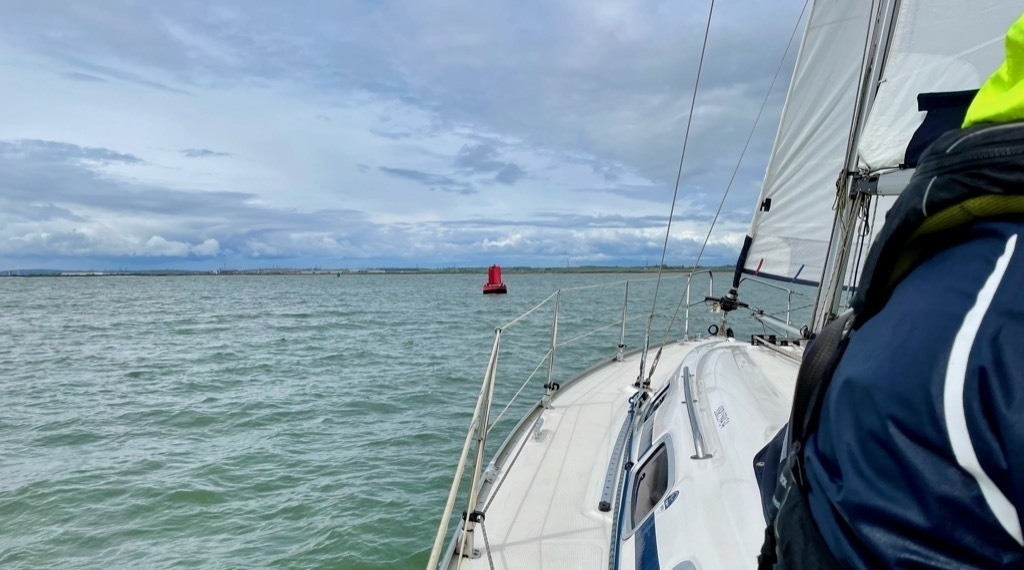 Mark 22 provided us with a little entertainment, despite only keeping a small amount of shore between us and the mark we got stuck on the mud! If it hadn’t been on the course we probably would have avoided it, but we didn’t have too much choise. Luckily the tide was coming in so we weren’t there too long, a few gusts of wind and close-hauled sails got us going again. As we made our last tack into Gillingham reach we could see the Class 1 boats steaming back into sight. We had a sensible amount of wind to take us over the line, expertly skippered by yours truly.

A fantastic race today, where enough was going on to not need any competition! The few beers went down very nicely, as did the coffee and walnut cake. Afraid there won’t be a race report next week, we’re off to Cornwall. Expect more from the Regatta the weekend following.